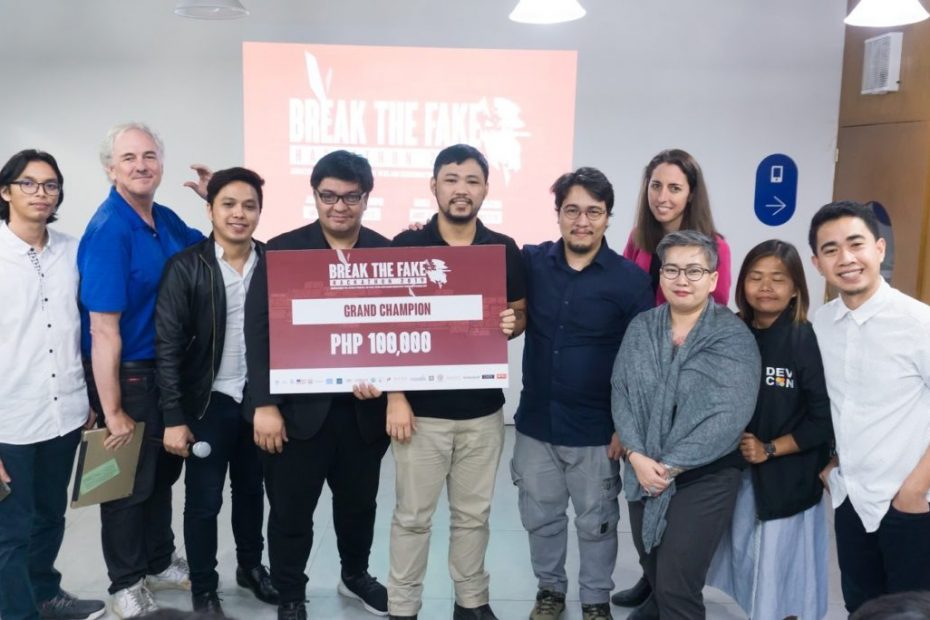 MANILA – A trio of friends from the Philippines are taking on the challenge of fighting fake news online by proposing a database that will store collected information on fake news sites and serve as a reference for researchers, journalists, and even ordinary netizens.

Troglodyte — a Filipino group composed of a game developer, and engineer and a businessman — won the coveted P100,000 grand prize and bested teams from Malaysia, Indonesia and the Philippines at the first Break the Fake Grand Hackathon 2019 with their proposal of a database bearing the same name that lists various information related to fake news sites.

“Ano ba ‘yung connections between fake news sites? Common owners, same hosts, same webmaster. If you have a fake news site and it’s connected to five others, there’s a high chance that those others are also compromised. We will receive all that data, store it, categorize it,” Ligot said.

The idea first came to Carlos Nazareno, who decided to compile a list of fake news sites.

“Nanggigil lang ako talaga sa dami ((I was frustrated with the sheer volume),” Nazareno said. “Nung natapos ako (When I had finished), there were around 60 international fake news websites combined and then 90 Filipino fake news websites. So I pitched this idea.”

The software contest was conceived in November 2017 by Break the Fake Movement in an effort to gather talent from different countries for a common goal.

“We’re pissed off with the idea of fake news,” said Gab Billones, co-founder of Break the Fake Movement.

Troglodyte said it is hoping the database can be a tool used by both professionals and amateurs alike.

“The bad guys are tech-enabled but the fact-checkers are not,” said Ligot. “We’re doing this just to even the odds.”

Engineer Nikko Torcita added: “We want it to be a tool that will ultimately really help… journalists, researchers, fact-checkers so that you never have to play catch up anymore.

“What if with this database you unravel a pattern and before they even post this fake news campaign, you’re able to deter and put preventive measures? That would weaken their activities.”

Game developer Nazareno added that they plan to work with media and the academe in developing a Transparent Reputation Index for the database.

He hopes today’s youth can slowly turn the tide on the rapid spread of fake news online by coming up with projects that encourage critical thinking for all netizens.

ABS-CBN reporter Chiara Zambrano, who gave a talk about the pros and cons of citizen journalism, said, “The truth doesn’t come on a silver platter handed to you. You really have to dig and fight for it.”

Ligot said he is looking forward to making sure the project takes off.

“We need to be full time on this kasi ang kalaban mo (because our enemies), full time din,” he said.

Nazareno said he was inspired to join the hackathon because it was a way to make a positive contribution to society.

“It serves as a inspiration for people to come together and come up with ideas and solutions. It’s not about the prize money. It’s important that what we did, somebody does it, too. Maski ipamigay na naming yung idea, basta may gumawa kasi itong mga solution na ‘to, importanteng ma-implement sila (We can donate the idea to someone else as long as it gets made because it’s important that these solutions are implemented),” he said.

Prior to the event in Manila, mini-hackathons were conducted in participating countries to determine the teams that will compete for the grand finals.

Free Wifi, a group from Indonesia, proposed a chatbox called IVA (Information Verification Assistant) that aims to provide verified information to users through a messaging service.

Ambient, a group from Malaysia, proposed an app bearing the same name that relies on comments, rates and crowd intelligence to determine verified and fake information online.

ABS-CBN is the official media partner of the Break the Fake Grand Hackathon 2019.