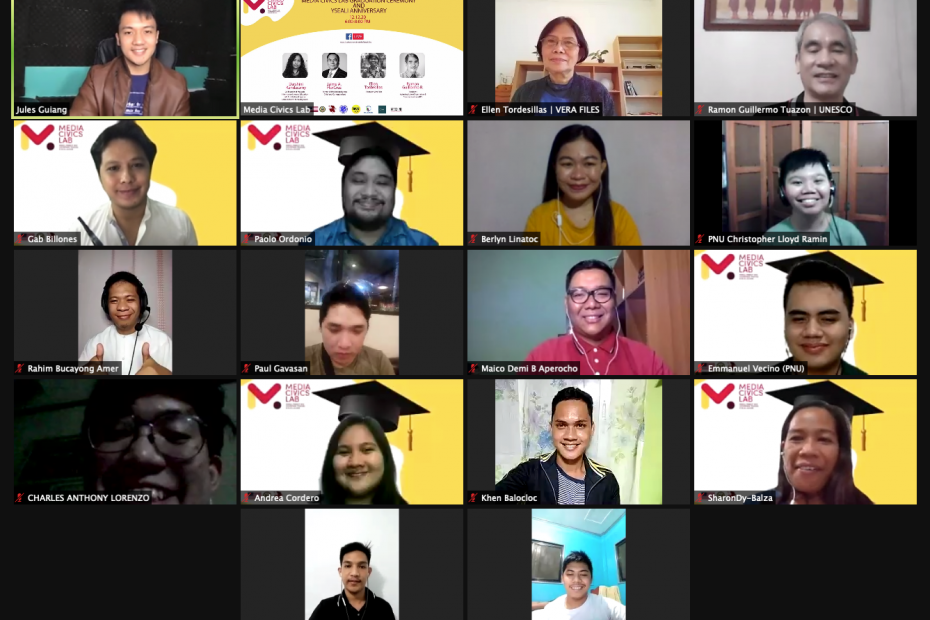 Media Civics Lab just concluded the second phase of their Media Literacy Program aimed at educating youth leaders on how new media can be used to spread information while recognizing and eliminating fake news, in their respective communities. The series of webinars and workshops concluded with a surprising turnout participated by Sangguniang Kabataan (SK) leaders nationwide.

A total of 452 youth leaders from all over the Philippines joined the workshops while 52 SK Leaders graduated from the program. By finishing the program, these SK Leaders are now armed with the proper knowledge to train youth constituents in their communities—just what Media Civics Lab envisioned—to acquire responsible digital citizenship skills to curb the spread of misinformation from the grassroots level.

Media Civics Lab would like to thank its partner organizations who teamed up with us in making this program successful. These are: Facebook Philippines, EngageMedia, Move.PH, AUC, Out of the Box, Vera Files, Internews, Disini & Disini, YSEALI, and FYt.

The resulting Media Literacy Program has raised the conversation of battling disinformation by creating a series of discourse by educating youth leaders with a correct understanding of how the new media works and instilling to them the right mindset on how to use it for the betterment of their communities.

“It can cause a series of threats to human rights, freedom, justice, and democracy everywhere”

As the adage says, “the truth shall set us free”, there’s no other way to enjoy our freedom by becoming responsible digital media practitioners from hereon.

A joint project of the U.S. Embassy of the Philippines and Break the Fake Movement, and in collaboration with the Foundation for Media Alternatives (FMA), the Media Civics Lab is a Media Literacy and Awareness Training for Sangguniang Kabataan (SK) and other emerging community youth leaders all over the country, with the goal of equipping them with crucial responsible digital citizenship skills and grooming them to become the next breed of media literacy and awareness champions in their respective communities.